Realization of Resistance and the Path to Relaxation

I see a lot of posts about how our horses are full of resistance in many different ways. People talking about having "arguments" and "fights" with their horses, or how they are so tired from having to pull their horse around. These are all big signs of resistance that I think we have become far to comfortable with as an every day part of our riding and training. I will be the first to admit I am very guilty of this very thing! But over the past few months of working with my horses every day, coaching others with their horses on the ground and their mentality of the situations at hand; I've realized a lot of things that we do to cause that resistance in the first place.

So really those arguments and fights are not with our horses; but with ourselves.

Last night was a perfect example for me. I had a free night to get my hubby out to video tape my progress with Johnny from our dressage lessons as we have been doing so well...
First mistake: I made an expectation of our performance to be captured.
Then I set it up on a tight timeline as my hubby had to rush out quick to film and then back in to study for his exams.
Second mistake: tunnel vision timeline.
So you can imagine the warm up we had was very yucky. I stepped out of my routine and skipped over our ground games warm up, (Can you say biggest mistake, number three?) then moved through out under saddle warm up with too much push. This resulted in a very fresh horse, who was working very hard to contain himself. But at times could not, and we ended up in a battle of pulling and rushing and deeking out and frustration. It was funny to me though (afterwards) that once our phones ran out of batteries and we had nothing left to film with.. I sat back and woke up. I could see how much Johnny was trying to be good for me, but couldn't. He needed a good run, he needed a good buck. And he was fighting every urge to do so with me on his back; even when I was pushing him into contact.
This is where I realized I was fighting against myself. I had pushed myself to the point of idiocy trying to perform for this silly video; that I had compromised my promises to my horse. So we sat back, forgot about being on the stage and just rode soft. I talked to him through every step, I talked to myself through every step. I made my new goal to be the lightest rider with the softest hands, to give release to every slightest try. And that's where our moment came. That's where we put in our best work to date. He relaxed into the softest collection, I sat back and relaxed into the most comfortable and balanced sitting trot of my life. And there we had a real conversation. This is what meditation feels like.
And then we stopped. Together we said we had had enough, we had accomplished what we had set out to do. We made amends, and called it a night.

But after I cooled him off a bit and took him back to the arena to roll in the sand (his favourite luxury); he showed me what was really going on before. He had a run and a buck, he nickered and played. He rolled and pranced. But the most amazing thing happened... he invited me to join him. He would run over to me and tag in, making me think he was ready to go back outside; but when I went to reach for him he would shy his head away and take a step from his shoulder towards the open arena. So I would stand back and let him go, thinking he was going for another roll. But as soon as I stopped he would step back to me, again tag in and wait. But if I reached for him he would point us to the arena.
I caught on, and went running into the arena. And he came charging and bucking behind me! We ran and jumped, and called out and laughed. Rolled and played. He would run at me and stop on a dime, then we'd rear together and rush off again all fours up in the air. I have never laughed so much in my life. His entire being was right there, full of high spirits and sharing that energy with me. What an honour it was to be invited to this amazing display of soul.
And at the end of it all, he just relaxed and walked over to me. Put his head low and took this beautiful deep breath. As if to say, "See mum, see how much better we are like this?" 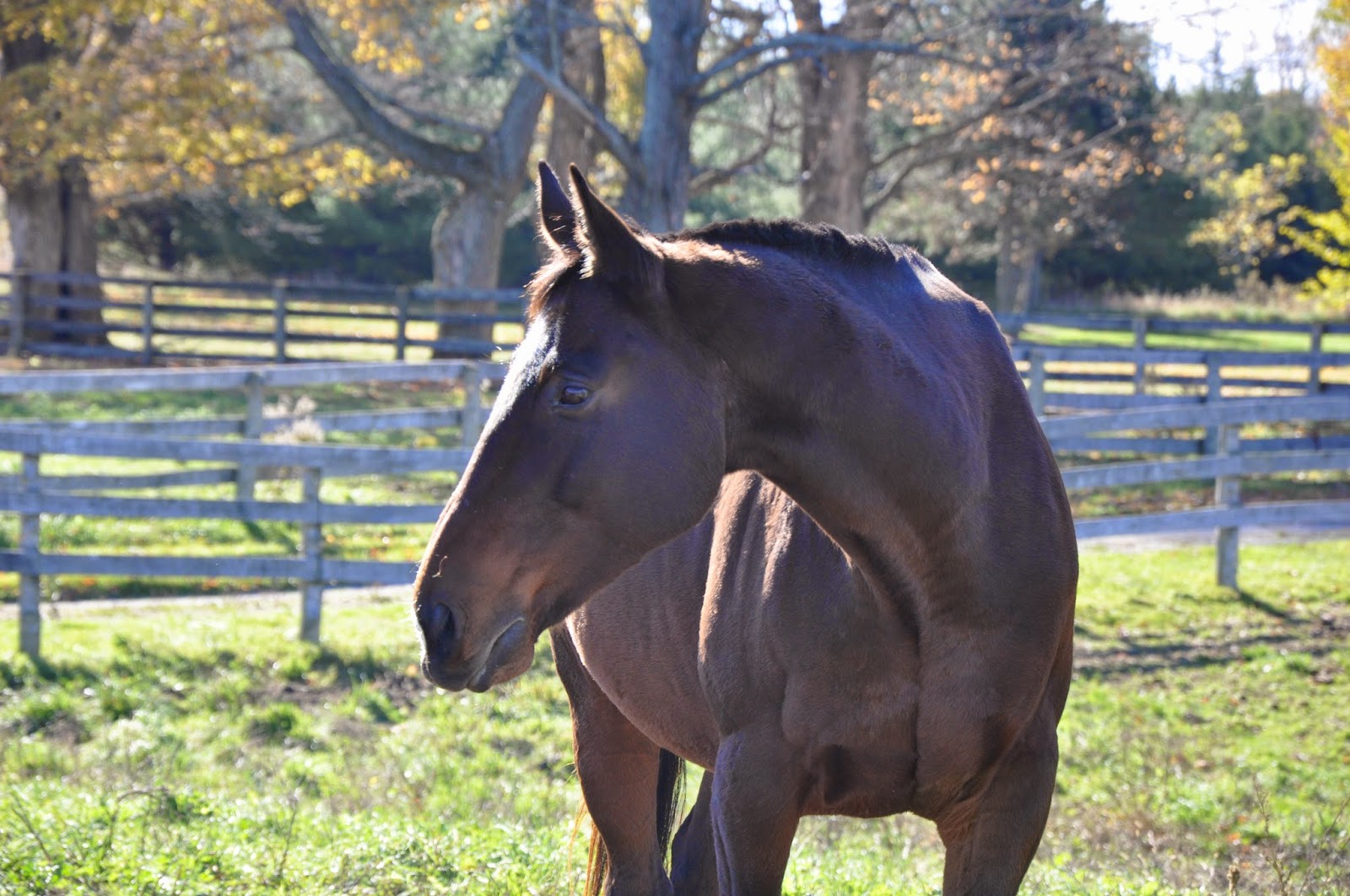 This realization has put me on the path I have been searching for. The idea that I am not here to force my horse into anything, but to work along side him and enjoy his company. To dance and play through our "work"; not fight and argue. To sit back and enjoy the ride towards our goals in whatever way it comes; for that day, for that moment... To pull my human mind set away from the entire ordeal; and to run and kick and play like a horse. 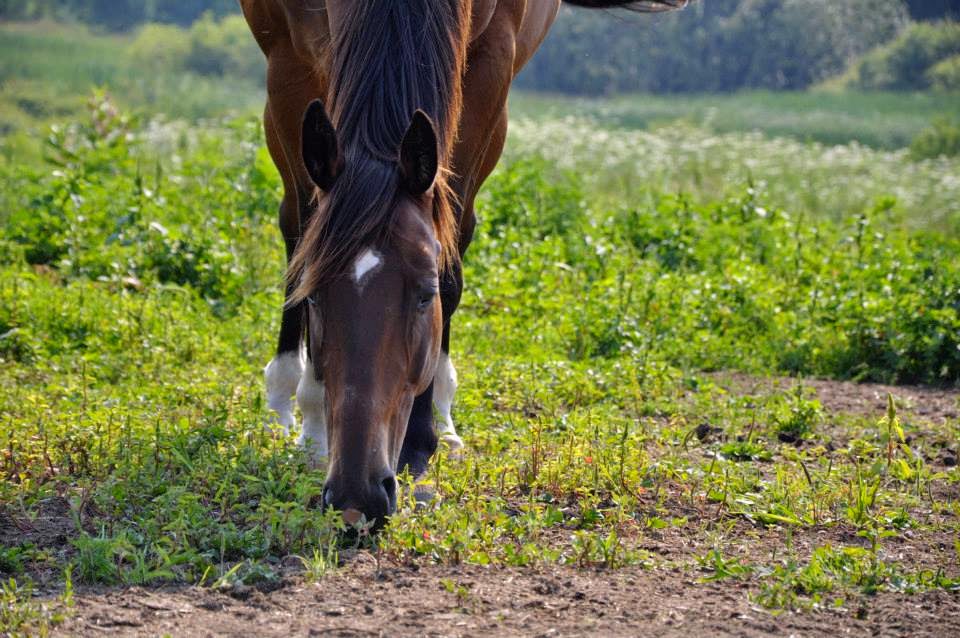 And this is why I will forever wear this horse upon my sleeve. 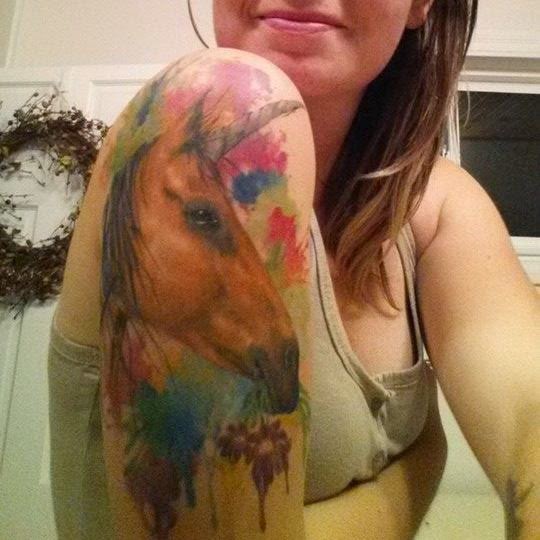