In my last post I talked about how curiosity breeds bravery, and how important it is to encourage and reward curiosity in your horses. Today I want to talk about different approaches you can take to bring out the curious nature in your horse. Specifically when dealing with a "spooky" object.

Today I had the fun job of defreezing the pipes to the automatic waterers with a heat gun/blow dryer. I knew this scary new attachment to my arm would spook some of  the horses while I was in their stall, so I thought of some silly ways to approach it to make it interesting to the horses instead of scary.
I started by first entering the stall as me (no heat gun of doom), and made sure each horse was ok with my presence while they were comfortably eating hay. From there I stood outside their stalls with the dryer on, so they could get a good idea of what sound it made before it got too close and too overwhelming. From there I walked up and down the aisle a couple of times with the dryer on (my own little approach and retreat from afar)... Yes I looked pretty silly. Luckily no one was watching! The first time I walked up the aisle, I had a few snorts and a couple loud half step escapes from the dryer of doom.. but the second time down I got a lot of heads poking out of stalls... "What the heck are you doing lady?!" Curiosity had kicked in!
Once I had their attention, I started out on each stall to defreeze the pipes. It was very interesting to me to watch the reactions as I was working away. I have found that the majority of the horses were most interested in the object when it was just working away at it's job, and with no direction or intention laid at them. So I put my back to the ponies and worked away. A couple of them decided a corner away from me was safest, until they wanted to eat their hay... then they would mission over ever so slowly, keeping full attention on me at all times, grab a nip of hay and then rush back to their corner of solitude. Now here arises a cross roads, do you work with the spooked horse with intention to have them desensitized to the dryer or do you let them approach and retreat their way around it? Both ways can be positive, but I believe allowing the horse to make the decision to get close to the scary object themselves over time is always the most positive option. It gives the horse the time to think it all through and then decide when they are comfortable to approach it. This also gives them much more confidence to follow the drive of their curiosity! And in this action of their own choosing, you get the opportunity to reward their bravery too!
Another great one I love to play with the horses, especially with clippers, is the "peek a boo" game. In this game you show the horse what is scary while standing near them, then before they can even think about it being scary, you pull it away beside you, nearly out of view. Then you show them again, allow them to almost sniff it, then pull it away back to your side. If you keep doing this, you'll notice something begin to happen... The object stops being scary, and the horse starts being very interested in the object instead. It's a little bit of reverse psychology; "what you think this is scary? Well good, because you can't have it anyway!" Sooner then later you'll have a horse neck wrapped around you in search of those scary clippers, which have unwittingly become a new toy! Try it with your own horse, if you are going to play with clippers, make sure you work with them off first. Then work your way up to having them on. And always make sure you approach new objects as if they are brand new, especially ones that turn on and become something different. Clippers off and silent vs clippers on making noises are completely different things to a horse.
Make it playful! Horses deserve to be treated like the kind, playful kids they are at heart, don't let the instinctual prey animal get the best of you! Instead, bring out the fun! 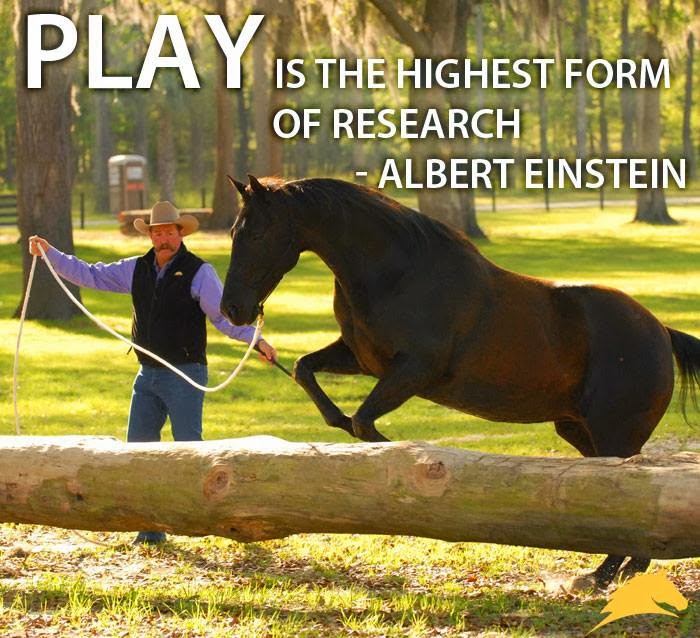 A great one from two wonderfully intelligent men of our time! I owe so much of my inspiration to Pat Parelli, and my natural horsemanship coach Lindsey Partridge for putting me on this path.
Keep on keepin' on!